Due to global chip shortages, many headsets are on backorder. Contact us to verify stock and lead times!

Roll over image to zoom in

See what Tech Reviewers have to say about the Tilde Pro.

TILDE® PRO’s unique design brings together elegance and customization. The patented selective noise-cancelling technology offers noise-free communication and a better focus to professionals, no matter how loud the environment is.

Designed and made in France, the premium headset proposes a unique modular design with interchangeable on-ear or over-ear pads and a detachable boom-microphone.

With a detachable boom-microphone and interchangeable on-ear or over-ear pads, TILDE® PRO is the only office headset with a modular design. The four possible configurations allow each user to choose the design that perfectly fits his needs. The replaceable pieces make the product part of a sustainable approach, for a better cost in the long run. Enjoy the most natural noise reduction while you choose how much noise you want to let in. Reduce noise up to -30dB to eliminate distractions and display the “concentration light” on the headphones. With a simple press, start a face-to-face discussion while ambient noise is turned down. Finally enjoy headphones that lets you connect to your surroundings whenever you need to.

TILDE® PRO has a detachable boom-microphone in option to ensure crystal clears calls, no matter how loud your office is. Ongoing calls are notified by a red “busy light” to avoid being interrupted at work.

TO ALL WORK TOOLS

Wired or wireless connections are available on TILDE® office headphones. TILDE® PRO connects to all work equipment with Bluetooth 5.0 and USB-C:

Apple Airpods Max vs Orosound Tilde Pro - Which one is better?

How to connect Orosound Tilde Pro to Computer (Bluetooth pairing)

If you are not 100% satisfied with your purchase or we are not able to make it right, we will refund your money and pay you 10%.

How does the 110% money-back guarantee work?

It's simple. As long as your within our return policy (60-days from the date of purchase) and you are not satisfied and we cannot make it right. Then you can choose from these 2 options:

How does the process work?

Simply indicate that you would like to take advantage of our 110% money-back guarantee.

You can always live chat with us or visit our contact us page.

Included with every order is FREE shipping that typically arrives within 2-5 business days. There is always an option to upgrade to 2-day or overnight shipping if needed.

Decide the product is not for you?

No problem, we provide FREE pre-paid return shipping label to make the process easy and hassle-free.

They are nice looking

Easy to use, comfortable, and highly effective at cancelling noise in a very loud environment.

I purchased two. One I have on hand and the other is on its way. I spent a lot of time researching a potential switch for our teams in the office. So I purchased these two for us at home to test. Tech is good, and even better if you combined it with krisp. So built is great, tech is great, everything was pointing to a great headset. Here is the issue, they are really heavy and uncomfortable to wear especially if you have hair, or your head is bigger. I keep finding myself pushing them down to accommodate the headset the right way in my head. :-( If you are not worried about weight and size, they really are well built. I don't think this is a headset you can wear for a long time... either on the C-Plus or S-Plus... and it is unfortunate...

Up until a couple months ago I was using the Plantronics - Voyager Focus UC with Charge Stand (Poly) - Bluetooth Dual-Ear (Stereo) Headset with Boom Mic - USB-A PC/Mac Compatible - Active Noise Canceling before they broke.

After using my Orosound Pro C Plus, Tilde Pro Premium Bluetooth Headset with ANC and Excellent Noise Cancelling Microphone, with Over the Ear Cushions for the past month with my Android phone, desktop, and my Amazon Fire Stick, I can say that this is a high-quality product through and through.

Compared to my Plantronics Voyager Focus UC Headset, the construction of the Orosound Pro C Plus is much more solid, simplistic, and versatile. There are no exposed wires, the headband is a solid, soft material that is comfortable to wear for hours. I chose the over the ear cushions and they, too, are very comfortable on my ears. I wear glasses and have multiple ear piercings with no discomfort. Plus, the ear cushions are easily removed if they need replacing, or if you just want to switch the ear cushion style. Last, the microphone boom is easily removed, and reattached, once the Orosound branded plug protecting the magnetic prongs, has been removed. I did find removing that plug a challenge, but I have very limited hand function.

Performance wise, the Orosound Pro C Plus has enhanced my home office experience significantly. Before the pandemic, I was home alone with the office to myself. For the past 18 months I have been sharing that space with my fiancé, and it has been a challenge to work around each other’s schedule so as not to disturb our perspective client calls, webinars, meetings, and all other aspects of daily living that makes background noise. That problem has been solved!

The ANC on this headset is stellar and does not affect the quality of sound that my clients hear. This was a problem with my Voyager Focus UC headset, for what little ANC it offered, it couldn’t be used on client calls. I am also happy to report that it significantly reduces the booming voice of my fiancé and his father when they’re speaking on the phone! That is no easy feat, and yet I can put my headset on and not have to be involved in their conversation. I would liken the sound level to the blender test. It is as good as it performed in all the Headset Advisor reviews and demos on their YouTube channel.

The removable, magnetic Noise Cancelling Microphone performs just as flawless. I tend to speak softly, and the microphone has no trouble picking it up and broadcasting it clearly, without any “static” noises that can happen when you move around or touch the mic.

My only criticism of the Orosound Tilde Pro Premium is with the function buttons because they are all so small. As I stated above, I have very limited hand movement so to turn the volume up, or down I must take the headset off. Likewise, I find all the short and long taps to be difficult when they need to be performed, particularly when trying to find out the battery charge. This a problem for a limited group of people – not a deal breaker – but a consideration for the next generation of the headsets. Bigger buttons. 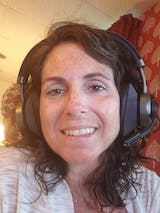 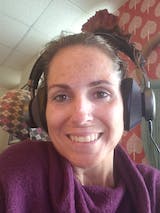 Hi Michelle, thanks for the awesome review and you're looking sharp with your new Tilde Pro on!!

Have used for 1+ week to listen music and taking calls. My comments:

Pros:
- Good voice quality, both yourself and your audiences can hear very clearly
- Good noise cancellation, even without ANC, the passive noise cancellation is good in compare with many other headsets
- Detachable boom mic

Issues:
- I found problem in Mac when using with Teams, can't put the headphone on mute with the button, guess it may be fixed in future with firmware upgrade or Mac specific driver.
- No Mac utility nor iOS/Android apps for configuration, i.e. you need Windows machine for firmware upgrade.
- A bit too tight so it is not very comfortable to wear for too long.
- Music quality still can't match those wireless headphones with best audio quality (such as Sony). So, if you plan to buy one headphone which can have best audio performance as well as call quality, then you may be upset.

At this price, i do expect more.

Thank you for sharing your thoughts! This will only help the Tilde Pro to be even better in the future.

Having used several headsets, from various makers, over my 10 years of progressive online meeting and teaching work, the TildePro is the best I've used yet. In fact, whilst not quite as ear-comfortable and lightweight as comparable Bose products, the noise cancelling is superior with Tilde Pro.

The versatility for "corded" or "cordless" - "top" or "over ear" audio is a big plus for me.

One current snag: Garage Band is not acknowledging my headset as an input - TildePro shows up in the menu as present in the Garage Band input monitor...but when I try to record suddenly the program registers "no input." Other than that (which I hope I can solve somehow) Orosound Tilde Pro is terrific.

We strongly believe that purchasing through Headset Advisor is the best overall value and you will be an absolutely satisfied customer. That is why we have created a full 60-day return policy with no limitations and we even cover the return shipping.

If for any reason you want to return you can get a full refund on your products you purchased from us for a full 60-days. Some companies require you to have all original packaging, unopened boxes, all items including manuals otherwise you would be stuck with the product however we DO NOT play games like that.

Don't want it? No problem just return for a full refund, we take all the risk so you can have peace of mind.

We even pay for the shipping to get it back to us!

Get started by visiting our contact us page here.